A comprehensive analysis of the situation in the area of fight against corruption needs to precede to the improvement of the existing mechanisms to prevent this phenomenon. Furthermore, it is necessary to clearly define which body at the national level coordinates and monitors the implementation of anti-corruption activities at the local level.

This was assessed by the Programme Coordinator at the Centre for Civic Education (CCE), Ana Nenezić, at the first panel of the national conference during the presentation of annual report on fight against corruption at the local level, which is part of the project “Let’s put corruption into museum!”, organized by the CCE and the Center for Monitoring and Research (CeMI).

Nenezić noted that not much was done in the area of anti-corruption at the local level in the last year. She also pointed out that only seven out of 23 Montenegrin municipalities adopted local action plan to combat corruption in accordance with the new model. “Others unfortunately did not. They have local action plans from the previous period. However, it is very concerning to us that despite all the efforts, we have not been able to come up with reports on the implementation of these local action plans from the previous period and to see what has been done to know if the measures that are planned for the next period are realistically and specifically defined,” said Nenezic.

She stressed that, at the national level, there is no body to gather the most important documents, to make an analysis and to provide guidance to the municipalities in which direction the policy needs to be developed. “We have given recommendations that this should be the Anti-Corruption Agency (ACA). When it comes to fighting corruption at the local level, it is very difficult to investigate such area when you have no systemic order. And our recommendation is that we must first focus on that part, so that we can continue further,” Nenezić considers.

She assessed that positive examples in practice exist in municipalities of Niksic, Cetinje and Berane, where, as she explained, researchers noted that the officials were ready to find the phone numbers of the competent institutions to instruct citizens how to report corruption. “But that’s not the way. We have to make a very clear system and to have clearly defined procedures, in order that citizens, if they come to their municipality, can report cases of corruption. Negative example is the capital city of Podgorica. The researcher was ridiculed when he appeared at the door of the Capital city office and he  was told that there were no cases of corruption and that he should contact ACA,” said Nenezić.

According to her, in order to improve the strategic framework and mechanisms for preventing and fighting corruption, it is necessary to precede with comprehensive analysis of the state of affairs with, as she said, realistic risk assessment, in consultation with relevant entities and “aggregating all data into one national document with precisely defined and realistically achievable recommendations “.

“It is necessary to clearly define which body at the national level coordinates and monitors implementation of anti-corruption activities at the local level. In our opinion, this should certainly be ACA,” said Nenezić.

Director of Legal Department at the CeMI, Bojan Božović, explained that corruption is a social phenomenon which is also an indisputable problem not only of Montenegro, but “the fact that this is a problem of other countries, to a greater or lesser extent, does not justify the inadequate way in which we face this phenomenon”.

Božović underlined that legal aspect and legal framework to fight against corruption is very important. “All of us, as citizens, have the opportunity to initiate proceedings against, in our opinion, responsible persons for performing corruptive criminal offenses. And this education, reminder, awareness that each of us can report certain corruptive offense is very important,” Božović said. 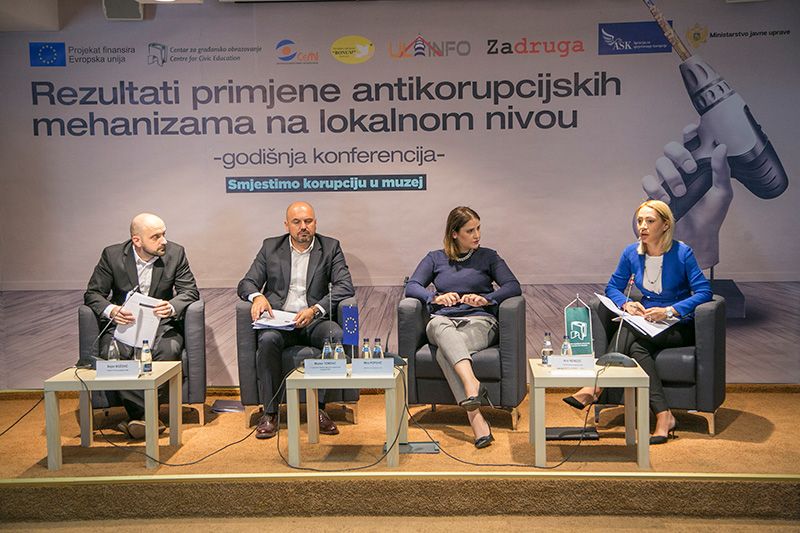 He notes that the consequence of this is discouragement of citizens to report corruption-related offenses, because “nobody wants to be the first to open this kind of problem”. Božović assessed that the analysis of corruptive criminal offenses must be significantly more detailed in the work reports.

“We need also to strengthen the legal obligation of competent state institutions to report such corruptive offenses, not only to ACA, but also to other state institutions that know that certain crimes are committed and to be aware that this is their job, though it does not belong to their primary jurisdiction,” Božović explained.

The fight against corruption when, as he said, it comes to the legal aspects, must be guided by all the institutions coordinately and nobody, as he thinks, can not say that it is not their responsibility or obligation. “It is important to say that we need to influence the courts to resolve such proceedings in urgent procedure, as we know that it is possible for the criminal proceedings to be initiated and that due to the delay of the proceedings, due to pressure on citizens, there are withdrawals of charges, and in the end, we do not get the effect we needed because we didn’t act faster“, said Božović

He stressed that actions against all public officials must be initiated, without discrimination and without, as he added, the difference whether someone is on higher or lower level and in what form they act.

Božović noted that in Montenegro, from 2000 onwards, when it comes to positive-legal regulations and adoption of laws and relevant international legal acts related to corruptive criminal offenses, progress has been made. “However, it is obvious that the implementation of such legal regulations is problem. This is not the case only when this matter is concerned. We can have an excellent legal regulation, but if nobody starts the application process, then that’s really just a dead letter on paper,” Božović said.

Concerning corruption reports related to the work of local self-government, most of the disadvantages at the local level are linked to proper disposal and use of state property, or the consistent implementation of the Law on State Property. “The second aspect of reports, to which the complainants point to, is breach of public procurement procedures and employment procedures,” Tomović pointed out. 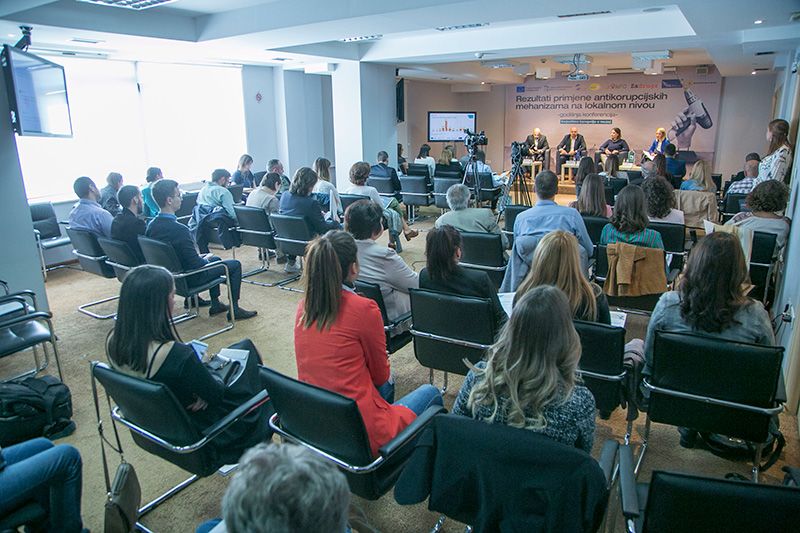 In the last year, as he stated, out of total of 69 reports, including 27 cases initiated ex officio, 41 proceedings were related to the local level, out of which, as he adds, one was submitted to the Prosecution Office, three to other bodies, and the irregularities were determined in two other cases and the procedure is ongoing. “The Agency found irregularities in 18 cases, while in 19 cases there were no irregularities,” Tomovic reported.

He said that the Agency had received 75 applications by 1 September 2018, that nine procedures were initially in office, and that 29 procedures related to the local level. “One report was forwarded to the competent Prosecution office, four to other bodies, one irregularity was determined, in two cases none, one case is under procedure. In all nine cases ex officio the Agency found irregularities,” Tomovic said.

The general recommendation to all institutions, as he said, is to raise the integrity plan from formal level to substantial one.

The project “Let’s put corruption into museum!” is conducted by the CCE conducts in cooperation with CeMI, NGO Bonum from Pljevlja, NGO UL-Info from Ulcinj and NGO Za Druga from Petrovac, where the project associates are Ministry of Public Administration and Anti-corruption Agency. It is funded by the EU Delegation to Montenegro.