Centre for Civic Education (CCE) has organised an awarding ceremony for best visual displays of corruption consequences within the framework of the project Let’s Put Corruption into Museum! today in the EU Info Centre in Podgorica.

On this occasion, CCE Executive Director, Daliborka Uljarevic, has assessed that ‘Montenegro has a serious problem with corruption, which no society is immune to. The additional problem that Montenegro has lies within inefficiency and selectivity of the authorised institutions when it comes to sanctioning of corruption‘. She pointed out the preciousness of the views from the perspective of the engaged artists, stating that such views are not common in Montenegro. ‘Communication of consequences of corruption through these works, can significantly help us in efforts to have more citizens who understand devastating consequences of corruption for the entire society as opposed to the benefit of individuals from the structures of power’.

Miguel Magro – Gomez, Programme Manager in EU Delegation to Montenegro, underlined the role of institutions in the fight against corruption, which EU insists upon as well, and added ‘I believe that it is vital to have most diverse stakeholders utilising their knowledge and talent to make clear that corruption is devastating for the sustainability of the society. This also includes artists. Hence, I am very happy that the CCE, with partners, through this project, has motivated the artistic community to express itself to this topic. And indeed, sometimes an artwork can tell almost equally as policy briefs, investigative articles or reports on corruption‘. He also emphasized the added value of this project ‘art-works will not die out through this call but will find a new life through the project web-site which will host all of them and a number of documented cases of corruption’.

Djordje Gregovic, Executive Director of the NGO Za Druga, partner organisation within the project, noted that art and corruption are distant terms. ‘However, we in Montenegro live with high level of corruption in the society. We are aware of the fact that art represents transference of thoughts, but the transference of thoughts with offering a new information, new impression. All received works have more or less been successful in this. The response has been extraordinary, and through all received works the energy of society is felt, as well as the energy and potential of what independent, autonomous, artistic and completely free opinion is inducing‘. 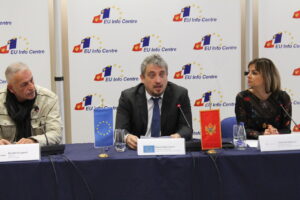 Nikoleta Corovic, the first-prize participant, said that she applied for the contest motivated by her personal interest in addressing the phenomenon of corruption. ‘I wanted to show my understanding of corruption. Corruption as a part of the show for broad popular masses, a mask that fits everyone and behind which is a real face and the power one can have, which is just part of an image that is not motivating for young people and does not bring hope for a better tomorrow. The award that I received today means a lot to me because it acknowledges my big work and effort, and I am very grateful for it’.

Dimitrije Benic, the second-prize participant, stated: ‘I would like to primarily thank you for the opportunity to express my view about the existence of corruption in our country by practicing my freedom of speech through art and transmute the criticism into action. I am also honoured that in this manner I have had the opportunity to present my works to wider auditorium.I am grateful for the award that will motivate me even more‘.

The public call lasted for a month, totalling with 55 received works submitted by 38 individuals and teams. The commission selected five best visual displays of the consequences of corruption, thus the first prize and  1 000€ went to Nikoleta Corovic for the illustration entitled Corruption consequences, second prize and 700€ won Dimitrije Benic for an illustration called Dairying, third place and 550€  prize were won by Vladimir Cvijetic for video work titled Let’s put corruption in the museum, fourth place as well as the 450€ prize went to Vasilije Novakovic and Dejan Popovic for the illustration entitled Laundry Service – Peri Deri LLC, and the fifth place and the prize of 350€ was won by Bojana Micunovic, for the work entitled View Through the Fingers. 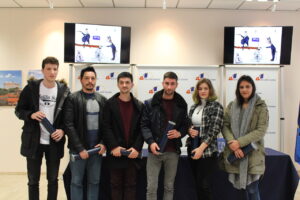 The public call is part of the project Let’s Put Corruption into Museum! Which aims to strengthen rule of law and quality of the European integration process of Montenegro, with the focus on contributing to reduction of corruption at the local level through increasing the involvement of citizens of Montenegro in the fight against corruption at the local level. CCE is implementing the project in partnership with NGO Center for Monitoring and Research (CEMI) from Podgorica, NGO Bonum from Pljevlja, NGO Ul Info from Ulcinj, NGO Za Druga from Petrovac, whereas project associates are the Agency for Prevention of Corruption and the Ministry of Public Administration. The project is financed by the EU Delegation to Montenegroand co-financed by the Ministry of Public Administration.